Gmail had a major outage early Tuesday morning: for about two and a half hours starting at 1:30 am PST while many of their users in the US were asleep, many people couldn’t access their email. Lots of people around the world who rely on Gmail were disrupted during their waking and working hours.

In response to its extended outage, Google has just launched the Google Apps Status Dashboard. The dashboard offers an at-a-glance look at the system health of most popular Google services, including Gmail, Google Calendar, and the company’s suite of web-based document editors. Google has been pretty good about responding to down time with blog posts alerting users with status updates, but having a dedicated page seems like a much better solution (especially for users who don’t follow Google’s blogs). 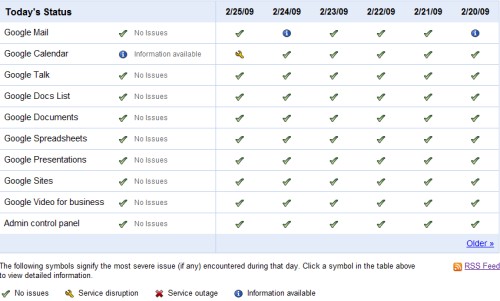 As you can see above the dashboard lists most of Google popular services, a date range (you can view older date ranges as well) and an icon displaying the status for the individual service. The status icon will indicate: No issues, Service Disruption, Service Outage, and Information Available. Clicking the symbol in the table will allow you to view more detailed information. There’s also an RSS Feed icon shown on the page, however… it says “Coming Soon”. This too would be handy, unless you’re using Reader of iGoogle to fetch your feeds and one of those services is down as well.