You are here: Home / Tech / The Best Way to Control Multiple Computers with a Single Keyboard and Mouse

What’s the best way to control multiple computers with a single keyboard and mouse? InputDirector.

Using multiples computers in a single space has always been a pain. All those keyboards, displays, and mice not only take up a considerable amount of space but moving from one to another can frustrating. In the past the only solution was to use a KVM (Keyboard, Video, Mouse) to share a mouse and keyboard between multiple computers. A KVM was a piece of hardware with a bunch of cables coming out that allowed you to hook one keyboard and mouse into multiple computers. They did make life easier, but they were clunky to use and required hardware toggles or keyboard controls to switch. Thankfully, there are plenty of software based options these days and I’ve put several through the paces…. here’s my lightening review.

Thankfully, there are quite a few software based KVM solutions today that can be used to control multiple computers. Here are the ones I’ve tried:

Of those listed above Multiplicity and Input Director are Windows only. The others on the list are cross platform and will allow you to share between OSX, Windows, and sometimes Linux. In the past I had a need to be cross platform when I needed to control multiple computers, but since I decided I REALLY couldn’t stand OSX (personal preference… nothing against you Apple guys) I’m back to an all Windows environment. Since this is a lightening review, I’ll touch on my experience with each as quickly as possible.

Synergy
Synergy is one of the older cross platform software KVM’s used to control multiple computers around. Here’s my review: I couldn’t even get it to work. Perhaps with some tinkering I could have but in today’s world I expect apps to be install, run, and up and working.

Mouse Without Borders
This is a new application that comes from Microsoft’s Garage (MS’s after-hours pet project program). Setup was easy as pie and the application looks nice. However, after using it for a little while I can’t recommend it. The application simply couldn’t keep up for my needs to control multiple computers, as you can see in my review here.

Multiplicity
Multiplicity comes from Stardock, a company I was a huge fan of back in the XP days (their Windowblinds application let me remove the FisherPrice “My First PC” look and replace it with something slick). Multiplicity does everything I wanted it to do and performance was fine and it easily allows you to control multiple computers. The downside to this application is that you have to pay for it… and let’s face it, with free alternatives why would I do that?

ShareMouse
ShareMouse is what I used when I had an OSX machine on my network and needed to control multiple computers. Performance was acceptable, installation was simple, and it just worked. Sharemouse however, like the others listed above, don’t hold a candle to next to what I consider the clear winner… (Note: See update below) 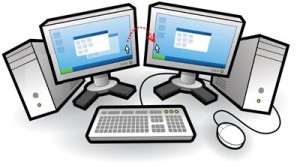 Input Director installed easily, configuration was simple, and it just worked. In addition to that it offers the most features of all the applications I tried. You can share the mouse and keyboard, have a shared clipboard, and move file between the systems. Input Director has multiple monitor support and encrypted network traffic (AES with a 128, 192 or 256bit key)… all standard stuff for a software KVM used to control multiple computers.

Here’s where Input Director starts to shine though… it will allow you to lock all computers and once, synchronise the screensavers on all computers, as well as the shutdown of all machine simultaneously (or individually configure whether a computer goes to standby, hibernate or shuts down).

Unlike most other software KVM’s you can configure InputDirector as to WHEN and how it will transition your mouse to another screen. For instance, I set mine to only go to the next PC after the mouse has been on the corner for a few milliseconds. This feature is really handy as it helps prevent accidentally moving to the other screen. Other screen control features include being able to tell it to only transition when you double tap the mouse on the screen edge, limit screen transition to only the corners of your screen, or only via hotkeys. You can also tell it to perform a ripple effect when the cursor jumps screen so that you have a quick, visual indication of which screen the mouse is on.

But wait… there’s more! If you really want power features Input Director has you covered:

The only critique I could give of Input Director is that the interface looks dated… but seriously, once it’s configured you won’t need to touch it so that’s a very minor gripe. Input Director is free for personal use and has the broadest set of options available. Unless you’re in a multi-OS setup it’s the clear winner as far as I’m concerned.

Give Input Director a try!

Update: As you can see in the first comment below ShareMouse is a beta product (though I couldn’t find it labelled as such on their website). Again, is was the one I’d settled on previously and is a great product. Well they left a note in the comments stating that they’ll be adding many of the features of Input Director and noted a few features that make them stand out. Hopefully they’ll let me know when it’s out of beta and I’ll re-evaluate at that time. Thanks for dropping by ShareMouse team!