As Matt Mastracci was poking around some Google+ he found hints at several new features that could be coming soon to Google+. Among them are integration with Google Voice, Wall Writing, Google+ Experts, new Privacy presets, and more options for viewing photos.

Last night, and early this morning, a man named Matt Mastracci, was diving into the Google+ code in order to find a way for users to utilize the “Circle sharing,” feature before it actually rolled out to them. What he found was quite surprising. In several posts he made over a few hours span, Matt has revealed several pieces of code, which suggest many new features in the works for Google+ users. Here is a rundown of what he found, thanks to several posts on Google+, as well as his own blog post.

It appears that soon users will be able to call other users on Google+ without having to reveal their own phone number. Perhaps there will be a “call” button on everyone’s profile, only available to those you have in specific circles. Here is a look at the source code that Matt found.

It also appears as if users will soon be able to write on each other’s walls, sort of in the way that Facebook allows you to message people on their walls. The only difference is that, according to the code, and Matt, the messages will only be available to the person whose wall it is. This could equate to a faster way to message individual users without having to +”their name”. Below is a quick look at the code in which this feature is found.

Google may be about to roll out a product called “Google Experts,” which functions inside of Google+. It appears as if users will be able to ask experts questions, and the questions will function in a similar way to how posts on Google+ already function. This could be a Google Quora competitor integrated into their new social network. Below is a look at the code in which these features reside.

Privacy has been a major concern for Google while rolling out Google+. After the disaster with Buzz, they knew that they needed to get this one right. It appears that they will be implementing a Privacy preset box sometime in the future. Below is what it will likely look like once implemented. Thanks again to Matt. 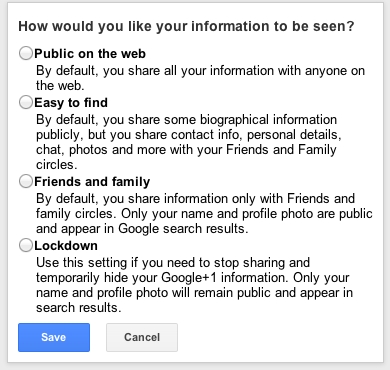 Last but not least, Matt also came across code suggesting a new option while viewing one’s photos. Users can now click to view photos from their messenger. If you recall, “Messenger,” is now Huddle, meaning that users will be able to view only the photos which were sent to them via messenger. Here is a look at how the new option will appear within one’s Google+ photo section. 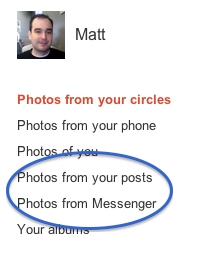 Nobody knows when these feature will roll out, however, they seem to be coming along with surely many other new features in the works on Google+.

Original post from Plusheadlines where I’m a regular contributor.