You are here: Home / Tech / Android / Run Android apps on any platform

Two companies are hoping to unleash the power of Android apps, allowing you to run them on any platform. The companies intend to provide a host environment for the Android apps to run pretty much anywhere you want. Both companies products work a lot like Wine on Linux, which allows Windows programs to run inside Linux without installing Windows or using a virtual machine.

OpenMobile announced its Application Compatibility Layer (ACL) technology at CES, saying it will provide the ability for 300,000+ Android Apps to run on non-Android operating systems. They do so by leveraging Google’s runtime environment and Dalvik VM. In the video below you can see Android apps running on the Meego platform and claim that any Android application will be able to run. OpenMobile ACL currently has support for Intel, and Nokia, and Linux itself, but has announced plans to release similar versions for Bada, QNX, Symbian, WebOS and Windows.

Myriad Alien Dalvik also enables Android applications to operate on non-Android devices giving access to other OS’s Android apps and Apps stores to a much wider range of devices. They claim that developers won’t be required to modify the core software but will only have to repackage of the Android APK files. Android apps running under Alien Dalvik will run as if native on the new device.

Rise of the Android Apps 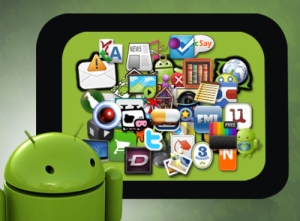 Unfortunately, you and I won’t be able to buy this software ourselves as it’s being targeted toward device manufacturers. With luck this will change sometime in the future. Regardless, if these two companies are successful, and the applications run at native speed, we’ll begin to see Android apps popping up everywhere. Developing Android apps will suddenly become much more profitable for developers as they can write for Android and have their Android apps run on ANY device. As the Android development environment grows, so too will the number of Android apps.

While I don’t think they’ll be able to control the primary OS, I have dreams of being able to run WidgetLocker on my laptop.