You are here: Home / Tech / Apple / Google Maps is the Top iOS App

Google Maps has become the top free iOS app overnight. Apple ditched Google Maps in iOS version 6 to the dismay of many. Google has now released their updated iOS application and it’s an overnight sensation. 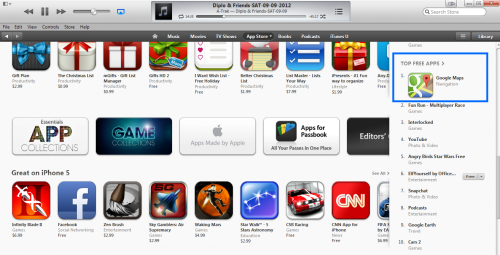 The downside to Google Maps on iOS is it lacks Siri integration. Then again, it’s unlikely to send you int the Pacific ocean or take you the extraordinarily long route.

Google Maps also integrates listings from Google local search (for restaurants and stores), Zagat listings, and public transit listings. If you need to find a bus, train, subway, or walking directions with Apple’s maps you’re out of luck. Oh, and if you use a Google account you can sync searches, directions, and favorite places between your iPhone, iPad, other computers, etc.

Google is also releasing a Google Maps SDK for iOS, which will allow third-party app developers to incorporate Google Maps inside of Apple Maps. The new Google Maps app runs on any iPhone, iPad and iPod Touch that can run iOS 5.1 or newer and its available in 40 countries and 29 languages.

Get Google Maps for iOS here.