ReWire is an app who’s premise is to gamify meditation. Sadly, it proves to be distracting and annoying instead. 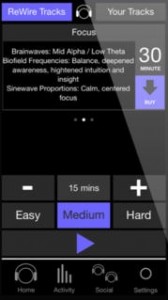 That’s how that app describes itself, as meditation remixed. I first heard of ReWire on a Buddhist Geeks podcast called “Rewiring meditation for the digital age“. During the interview Mike Redmer, the creator of the app, and Vincent Horn discuss meditation apps and where contemplative, meditative technologies are headed. ReWire began as a meditation timer, but eventually turned into more than that. In addition to tracking your time on the mat, ReWire attempts to help in the process of “noting”. Specifically, a practice called “Just Note Gone” developed by Shinzen Young. A PDF describing Just Note Gone can be downloaded for free on Shinzen.org.

Noting can be very effective for building mindfulness. The technique is pretty straight forward, it’s a one word acknowledgement of experiencing something. This isn’t to be confused with thinking about something, when you do noting you don’t analyze or judge, you simple note what you experienced. Common notes might be “thinking”, “feeling”, “hearing”, “warmth”, “cold”, and so on. Noting is done to help maintain your presence during meditation.

ReWire attempts to help you maintain focus by making sounds randomly vanish from whatever you are listening to. You then tap the screen to indicate that you weren’t lost in though, the faster you tap the more present you are I suppose. After a session you get a break down of your time, accuracy, and speed. ReWire can tap into your iTunes library to let you use your own music. Alternatively, you can do an in-app purchase of three ReWire “brain entrainment tracks” tracks Joy, Focus, and Calm. You can preview and purchase all of the tracks on SoundCloud.

This app gave me the opposite of mindfulness

The concept of gamifying a meditation session certainly sounds like an awesome concept. As a longtime user of Insight Timer, I’m certainly a fan of metrics. It’s not that longer times or higher scores have any real meaning, but they can help you leverage your ego to stay on target with your practice. Each person is different, so your mileage may vary, and it’s a free download so you should check it out and make your own decision. That said, ReWire did nothing but make me feel frazzled, anxious, and agitated. The problem with this meditation app is that the randomly vanishing sounds are entirely to close together. I could never get an opportunity to get settled in as the track was constantly cutting out (or vanishing as they say) and I was constantly tapping my screen.  I think this could be a cool concept if it wasn’t so frantic. On the website they invite you to: Try a session yourself and see why experienced meditators and newbies alike are calling ReWire, “shockingly effective”. I found it significantly more shocking than effective.

If the frequency of what you’re listening to cutting out and the nonstop tapping of your screen doesn’t bother you then the app does have some good things going for it. The main UI is easy on the eyes and with the exception of a few odd settings it’s well thought out. The Social settings of the app are a simple way to contrast your score against others who’ve used the app.Despite it’s title, this isn’t where you do what most of us would think of as social sharing. You can share your progress via Facebook and Twitter, though it’s not immediately evident HOW to do this. Your account info isn’t under settings and it’s not available under the Social section. Instead there is a little arrow in the activity section that if you click will give you the option to share to Facebook, Twitter, or both.

Also, a note on brain entrainment. This concept has been in circulation since the 1960’s and is most commonly binaural beats, monaural beats, etc. In short, the idea is that you play different sounds/tones in each ear, and those tones match up with certain brain wave frequencies. So the idea is that you can train your brain into following those frequencies. Brain entrainment is a real thing. It’s the reason some video games have that warnings that they can induce an epileptic episode. That said, claims of the power of things like binaural beats aren’t conclusive and some say they could be flat out bad for you.