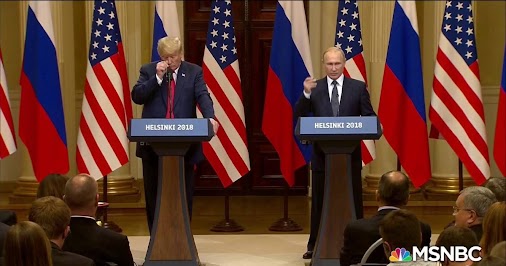 Trump White House cuts Putin support for Trump out of transcript
Rachel Maddow shows how the White House transcript and video of the Trump Putin press conference in Helsinki has been edited to remove the question asking Putin if he wanted Trump to win the election, part of a broader campaign of information warfare the Trump administration is waging with Russia against the American people.

Woah… this needs to be shared everywhere. During the press conference in Helsinki, Reuters reporter Jeff Mason asked Putin the question, “Did you want President Trump to win the election and did you direct any of your officials to help him do that?” He answered, “Yes, I did. Yes, I did. Because he talked about bringing the U.S.-Russia relationship back to normal.”

Fine. Fine. Here's the thing. The official White House transcript omits the first part of the question, “Did you want President Trump to win the election…" So… maybe that was a mistake…

The official White House VIDEO has been edited to remove that question as well. The Kremlin’s official transcripts removed the entire question and Putin's response altogether.

To recap:
1) The White House cut the question from the transcript
2) The White House edited the video itself
3) The Kremlin omits the entire question/answer
4) Trump declared that Putin is pushing for Democrats and "definitely" not him.