You are here: Home / Archives for Browsers

Firefox uses SQLITE databases to store lots of its settings. By the time the databases grow and Firefox starts working slowly. It will take a lot of time to load during startup, the overall speed will be effected, and browsing Histories will be too slow. This is very common problem and it occurs largely because of fragmentation of databases.

SpeedyFox takes care of any database fragmentation and thus makes Firefox zippier. You might not see a difference if you try SpeedyFox on a fresh Firefox install, it works great after you have been using Firefox for some time. Just close Firefox, run SpeedyFox and point it to the profile you want to optimize.

Once installed, SpeedyFox automatically detects your Firefox’s default profile. If you have more than one profile, you can select the one you want to optimize from the drop-down menu. If you have portable version of Firefox, choose your profile path manually by selecting “Custom…” profile. All you have to do is hit the Speed Up Firefox button. 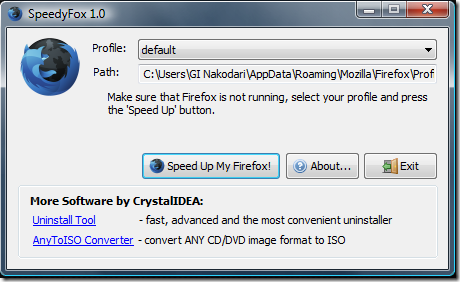 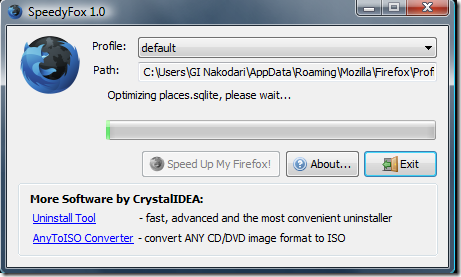 Long ago the king of the browsers was Netscape. Microsoft turned their massive shift very quickly once they realized exactly how important the browser would be to the future of computing and brought Internet Explorer in line with Netscape… and then the browser wars began. As a web developer I can tell you those years SUUUCKED. Each company would include “features” that only worked with their browser, build web apps when the web was young was difficult (I realize this still exists, but nothing like it did back in the day).

Last month, Microsoft’s market share in the browser dropped below 70% for the first time in eight years, while Mozilla broke the 20% barrier for the first time in its history. Initial data sets provided by Net Applications suggest that the Internet Explorer will drop once again significantly in December to below 69% and Mozilla will climb above 21%.

This doesn’t mean IE is out… 69% is still the lions share but it shows that other browsers are making in-roads to Microsoft’s stranglehold on browser marketshare.  The contenders are FireFox, Chrome, Safari, and Opera. FireFox is clearly in the lead as the primary competitor to IE. I personally use FireFox as my daily browser; when the next release comes out and their uber JavaScript engine is in place I can’t see myself going back to IE for anything unless it requires it. Chrome has the mighty Google backing it… it seems Google can do very little wrong lately and Chrome fits nicely into their long term strategy. However, Chrome is still immature in comparison to FireFox at this point.

For crazy detailed stats on each browser gain, decline, etc check out How serious is the market share loss of Microsoft’s Internet Explorer? at TGDaily.com.

I agree with the summary of the authors of the article… I’m stunned at how Microsoft is just letting this happen. Web apps may not be able to counter desktop apps yet (ok GMail is CLOSE… if they’d just get the contacts to sync correctly!); let’s face it… Photoshop via the web ain’t happening anytime soon. However, more and more applications are moving to the cloud. Google understands this and is pushing it agressively, MICROSOFT knows this and is building out cloud architecture… so I’m completely baffled as to why they would allow this to happen. IE8 beta’s appear to be a dude… slow, proprietary, and still not comforming to standards. Whereas the new-comers are quick, have excellent plugin architectures, the new rendering engines used in Chrome and the next release of FireFox make “web 2.0” site rawk. I guess the best we can hope for at this point is that Microsoft has a card up it’s sleeve for when Windows 7 comes out.

The gang at Google just continues to impress. As if GMail didn’t rock you like a hurricane already it now supports viewing PDF’s in your Web browser. Anybody who knows me knows that I HATE HATE HATE PDF’s. The documents are rediculously heavy and require an application to load. GMail’s “in-browser” PDF viewer is uber fast, includes a search feature, lets you download or print the PDF, zoom in and out, as well as quick paging via next/previous arrows.