You are here: Home / Archives for Chrome

Google isn’t known for using advertising to gain market share. But it looks like that wont be the case for their shiny new browser: Google Chrome.

Chrome ads have been showing up all over the Web on Google-owned sites like YouTube as well as third-party websites like LinkedIn. Now, the company is set to launch TV ads to promote the Web browser and they’ll be starting as early as this weekend.

The commercial itself was developed by Google Japan and is…. abstract. There is no voice over and no people. The video has the simple message “Install Google Chrome” at the end. It’s all very Apple-ish.  I almost expect the “there’s an app for that” voice to show up at the end.

What is now clear is that Google is committed to growing Chrome’s marketshare moreso than any other product in recent memory. This is to be expected, now that they’ve officially entered the browser game each Chrome install equals another user that gets Google as their default search engine. That said, Chrome is still lacking two key things: a Mac version (for those who run Mac’s) and an extension platform. Rumor has it that some announcements relating to those items may come at Google’s developer conference later this month…. until then I’ll hold onto FireFox.

Recently published Market Share statistics show the browser down almost 7% from the beginning of last year, continuing to slide down as time goes on. On the other hand, open source browsers such as Firefox and Google Chrome are constantly increasing. Firefox’s market share increased by about 4% in 2008, and Chrome reached over 1% in the first few months of its availability. Opera’s share remained steady around 0.71 percent. 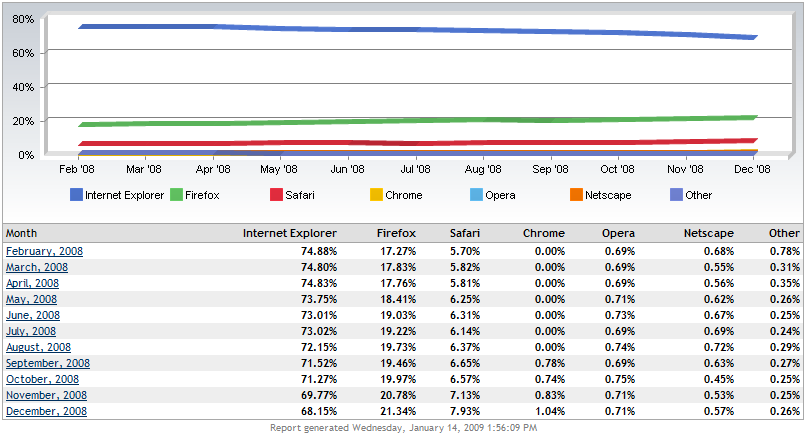 The gang at Google just continues to impress. As if GMail didn’t rock you like a hurricane already it now supports viewing PDF’s in your Web browser. Anybody who knows me knows that I HATE HATE HATE PDF’s. The documents are rediculously heavy and require an application to load. GMail’s “in-browser” PDF viewer is uber fast, includes a search feature, lets you download or print the PDF, zoom in and out, as well as quick paging via next/previous arrows.