You are here: Home / Archives for google voice

Want in on Google Voice’s web-based, transcribed, custom-greeted voicemail, but you’re not quite ready to adopt a new number? Starting tonight, Voice users can choose to keep their number and still get Google’s upgraded voicemail features. (Note that this still requires a Google Voice invite as GV is still in beta).

Google Voice is a Swiss Army knife of cool and free phone service add-ons — including free SMSes, an online mailbox for voice messages, the ability to have one number ring all of your phone numbers simultaneously, low international rates and a customized voicemail messages for every contact. It’s not phone service per se though, since you still need a mobile phone or landline.

But using Google Voice requires users to use their Google Voice number as their main number. That’s a not-inconsiderable burden, given that some mobile phone users have thousands of contacts who know their number and don’t want the hassle of changing business cards and forcing others to update their contacts.

Google’s solution? Create a light version that gives phone-number-huggers better voicemail. Using a mobile carrier’s call-forwarding codes, Google Voice Light will send a mobile phone’s unanswered calls to a Google-powered mailbox. When callers leave a message there, Google records and transcribes it, and saves it in an online mailbox. The roughly translated text and a link to an online recording can be sent via SMS or e-mail.

The capability will also benefit those who have migrated to Google Voice, since currently the voicemail feature only kicks in when people call the Google Voice number, which forwards the call to a user’s mobile phone. Currently, those who call the mobile phone directly leave a message using the mobile carrier’s network, but with the new system, those calls can be diverted as well.

The voice messages can be stored in perpetuity, forwarded to family or friends, and they can be saved, even if you decide to switch mobile carriers. In return, Google gets your loyalty, more users with Google accounts and more pages for it to place online ads. That’s also not including the training data it gets for its translation engine — not dissimilar to why Google offers a free phone number lookup: GOOG-411.

This doesn’t really help me since my carrier charges for forwarded calls… bummer.

Gmail is probably one of the last Google services that adds a very simple feature: a contact picker. When you compose a message, you may want to see the list of contacts so you can select some of them. But this feature wasn’t available in Gmail, although you could find it in Google Docs, Google Calendar and in almost any mail client and webmail service. Some people even wondered if you can send messages to more than one address: questions like “Why can’t I load multiple contacts when I go to compose?” or “How do I compose using my address book?” were very popular in Gmail’s help group.

“Auto-complete is convenient and fast, and usually does the trick. But sometimes seeing your list of contacts can help you remember all the people you want to include on your email,” admits Google.

The wait is over and now you can finally use the contact picker in Gmail: just click on “To” when you compose a message, select the contacts and click “Done”. 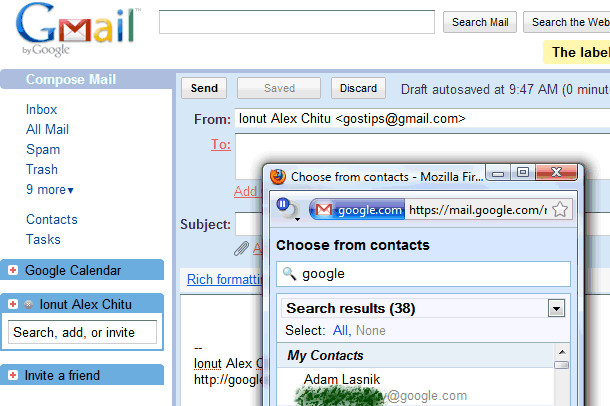 Some of the cool things you can do using the contact picker:

* select contacts from one of your groups: just use the drop-down to choose from “Friends”, “Family”, “Coworkers” and other groups.

* easily remove the contacts you’ve picked by just clicking on them.

* manually add email addresses by clicking on an empty space from the picker’s “to” box.

* if you’ve already typed some addresses in the “to” box, the contact picker will include them when it launches.

* add all the results of a search by clicking on “Select all”.

Now if they would just add this feature to Google Voice AND make it not happen in a popup (ugh… where’s the modal AJAX love Google?!) we’d be set. 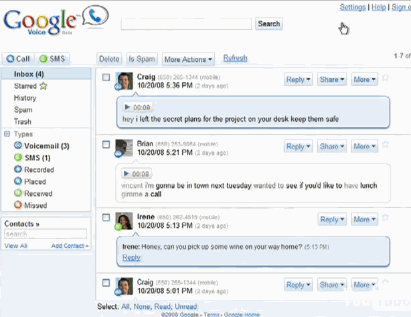 Google acquired Grand Central in July 2007… then it kinda died. If you were lucky enough to get a number the service continued to work but it appeared as if the Big G just forgot about the service. It now appears though that GrandCentral will rise from the ashes as Google Voice. It will offer a suite of telephony services, including all of the existing GrandCentral features as well as an automated voicemail transcription service, the ability to send and receive text messages, and integration with your Gmail contacts. Users can now also call any number in the the U.S. for free!

The catch: Currently it’s only available for GrandCentral users—who, according to the Google Blog post, should be receiving instructions in the next few days.

The new interface will look a lot like Gmail, with your inbox, SMS messages, access to voicemail and other features in a sidebar on the left. You can make calls directly from the Google Voice web interface. After you initiate the call, the service will actually first call your mobile phone or landline, and after that your call will be placed over Google’s network. Voice calls within the US will be free (watch your back Skype), you can purchase credits for international calls, and it will also offer free conference calls.

So GrandCentral will be replaced with Google Phone, and it looks to be a killer. Apparently, Google was not just sitting on GrandCentral and letting it die. It will integrate the One-Number-To-Rule-Them-All service, Voice Over IP (VOIP), SMS messaging, unified voicemail, voicemail transcriptions, AND a mobile version. This thing is going to be killer… check out the videos below.