You are here: Home / Archives for MarriageEquality

Following decades of debate over the constitutional right to same-sex marriage, the U.S. Supreme Court today handed down a 5-4 ruling in favor of the most buck-wild, balls-to-the-wall gay pride parade this country has ever seen. “After reviewing the constitutional underpinnings of this case, the court finds that it is discriminatory for states to deny the right to the most out-of-control, bonkers gay pride parade that anyone could possibly imagine,” Justice Anthony M. Kennedy wrote in his majority opinion, which outlined at length the elaborate floats, billowing rainbow flags, and phalanxes of outlandishly dressed participants, barely scratching the surface of how completely bananas things are about to get. “This decision confirms what should be obvious: The government cannot prevent a nonstop bacchanal surging through the streets of every American city. We’re talking half-naked lesbians covered in body paint, rollerblading homosexuals in brightly colored Native American headdresses and sparkling gold briefs, as well as hundreds of thousands of supporters losing their fucking minds while ‘I Will Survive’ blares at 150 decibels. This is going to be an absolute shit show.” The Supreme Court’s landmark decision was reportedly appended by a concurring opinion authored by Associate Justice Sonia Sotomayor in which she agreed that the right to “an uninterrupted three-day batshit insane rager” was mandated by the U.S. Constitution. 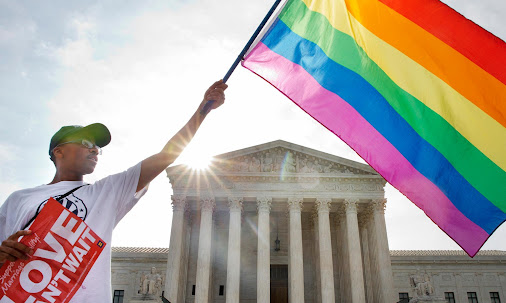 Supreme Court affirms right to gay marriage
The Supreme Court has found a Constitutional right to same-sex marriage, striking down bans in 14 states and handing a historic victory to the gay rights movement that would have been unthinkable just 10 years ago.

The Supreme Court has found a constitutional right to same-sex marriage, striking down bans in 14 states and handing a historic victory to the gay rights movement that would have been unthinkable just 10 years ago.

Anybody near me who wants to get married I'd be happy to marry you! (I've legally done it once already!)

Rowling originally tweeted the vote was "extraordinary and wonderful," and then quickly proposed that Albus Dumbledore, the gay headmaster of Hogwarts, could now marry Gandalf, from the Lord of the Rings franchise, in Ireland.

Westboro Baptist Church of course didn't like this and tweeted at her… her reply is awesome.

Apple, Microsoft, Facebook, Google team up to support marriage equality
A total of 379 companies, including tech’s biggest names, are trying to convince the Supreme Court to rule in favor of nationwide marriage equality. Thes

379 of the biggest companies in the world, including Microsoft, Amazon, Apple, Facebook and Google have teamed up to file a brief in the US Supreme Court in support of marriage equality.

The brief was filed yesterday by the Morgan Lewis law firm; it makes a business case to legalize same-sex marriage in the US. The brief states that the current legal standing on same-sex marriage is a burden on employers and employees and makes it “increasingly hard to conduct business.”

The justices will hear arguments for the case in April and a ruling will follow at a later date.

You can read the full brief here: https://www.morganlewis.com/documents/supportingdocs/MLB_Employers_Amicus_Brief-Obergefell-v-Hodges.pdf