You are here: Home / Archives for safari

END_OF_DOCUMENT_TOKEN_TO_BE_REPLACED

As he had already predicted, cracker Charlie Miller has won the PWN2OWN contest by cracking Safari and Mac OS X within seconds of the start of the competition. “It took a couple of seconds. They clicked on the link and I took control of the machine,” Miller said after his accomplishment. He took home the USD 10000 prize, as well as the MacBook he performed the exploit on. Internet Explorer 8 fell a while later by cracker Nils, who also cracked Safari and Firefox after being done with IE8.

Miller cracked Safari running on a fully patched installation of Mac OS X on a MacBook. The details of the exploit will not be given out until Apple has published a patch to ensure that others don’t run with the exploit and abuse it. This is the second year in a row that Safari on the Mac is the first to fall in the PWN2OWN contest, again by Miller’s hands.

A while after, Internet Explorer 8, running on Windows 7, also fell. Windows 7 was running on a Sony Vaio P, and was cracked by a cracker named Nils, who wishes to remain anonymous. He also won a cash prize and got to keep the Vaio P. Several Microsoft security folk were on sight to witness the exploit. This exploit is also kept under wraps until Microsoft releases a patch. Later on, Nils also broke into Safari (Mac) and Firefox.

All the cracks happened on day one of the contest, which means the operating systems and browsers were fully patched, with no additional plugins loaded. So far, only Chrome hasn’t been cracked yet, but that probably won’t take long, seeing how quick the first browsers were exploited.

Still on the table… this year’s contest will also offer a $10,000 prize for every vulnerability successfully exploited in Windows Mobile, Android, Symbian, and the iPhone and BlackBerry OSes. The competition runs through Friday… so it ain’t over yet. 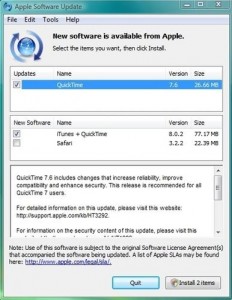 If you’re like me you hate seeing the image to the right… the Apple Update. Well, Microsoft has some good news for movie fans. If you want to watch .mov files in Windows 7, you don’t need to install Apple’s QuickTime. Say goodbye to those annoying updates, popups, and prompts to download other Apple software like itunes, Safari, etc. (I hate Quicktime almost as much as I hate iTunes).

The support for .mov files was mentioned deep in a long list of changes that are coming to the Windows 7 Release Candidate.

On the Engineering Windows 7 blog, in a post entitled ‘Some changes since beta for the RC’, Chaitanya Sareena, Senior Program Manager on the Core User Experience team, says “We’ve since added support for Windows Media Player to natively support the .mov files used to capture video for many common digital cameras.”

Awesome news if you watch trailers in .mov format (particularly Apple Movie Trailers), or if you camera outputs to the .mov format. On any other Windows system you have to have QuickTime (or… as I’d recommend, VLC media player) to watch a .mov file.

Long ago the king of the browsers was Netscape. Microsoft turned their massive shift very quickly once they realized exactly how important the browser would be to the future of computing and brought Internet Explorer in line with Netscape… and then the browser wars began. As a web developer I can tell you those years SUUUCKED. Each company would include “features” that only worked with their browser, build web apps when the web was young was difficult (I realize this still exists, but nothing like it did back in the day).

Last month, Microsoft’s market share in the browser dropped below 70% for the first time in eight years, while Mozilla broke the 20% barrier for the first time in its history. Initial data sets provided by Net Applications suggest that the Internet Explorer will drop once again significantly in December to below 69% and Mozilla will climb above 21%.

This doesn’t mean IE is out… 69% is still the lions share but it shows that other browsers are making in-roads to Microsoft’s stranglehold on browser marketshare.  The contenders are FireFox, Chrome, Safari, and Opera. FireFox is clearly in the lead as the primary competitor to IE. I personally use FireFox as my daily browser; when the next release comes out and their uber JavaScript engine is in place I can’t see myself going back to IE for anything unless it requires it. Chrome has the mighty Google backing it… it seems Google can do very little wrong lately and Chrome fits nicely into their long term strategy. However, Chrome is still immature in comparison to FireFox at this point.

For crazy detailed stats on each browser gain, decline, etc check out How serious is the market share loss of Microsoft’s Internet Explorer? at TGDaily.com.

I agree with the summary of the authors of the article… I’m stunned at how Microsoft is just letting this happen. Web apps may not be able to counter desktop apps yet (ok GMail is CLOSE… if they’d just get the contacts to sync correctly!); let’s face it… Photoshop via the web ain’t happening anytime soon. However, more and more applications are moving to the cloud. Google understands this and is pushing it agressively, MICROSOFT knows this and is building out cloud architecture… so I’m completely baffled as to why they would allow this to happen. IE8 beta’s appear to be a dude… slow, proprietary, and still not comforming to standards. Whereas the new-comers are quick, have excellent plugin architectures, the new rendering engines used in Chrome and the next release of FireFox make “web 2.0” site rawk. I guess the best we can hope for at this point is that Microsoft has a card up it’s sleeve for when Windows 7 comes out.